Memoirs of a Chubby Kid Who Wanted to be an Athlete

Some people may look at me and think, “She doesn’t know what it’s like to struggle like I do. She’s already in such good shape.” This wasn’t always the case. When I was a chubby kid, I had all kinds of self image issues. I injured my back three times in my life. I’ve also dealt with a knee injury, a hamstring injury, and a groin injury. Like many moms, I dealt with an awful laceration when giving birth to my large son, while the umbilical cord was wrapped around his neck. I know what it’s like to have never been fit. I also know what it’s like to lose the ability to move and have to start over from scratch.

The hardest part of my job is teaching group fitness classes that cater to mixed levels. I give many options and modifications in my classes. It’s still difficult for a beginner, who has never taken a fitness class before, to do the easier modifications while those who have been doing it for years are doing harder moves. “Just do the beginning move,” they hear the perky instructor say, as if it were no big deal, as if it’s not a blow to the ego to realize that one is not as fit as everyone else.

I know how you feel. Actually, most of us do. Some of the greatest athletes were beginners once, eating everyone’s dust as they struggled in the back of the herd. It’s okay to be a beginner. To be a beginner is exciting. It means you are doing something you haven’t done before and there is nowhere else to go but up.

I still recall my first week of high school. I spent the summer working out at a gym for the first time in my life. I wanted to take the next step and lose more weight so I joined the cross country team. Everyone else on the team was so fit. I struggled, barely being able to run. I wanted to be able to run like them, but I couldn’t. They could run for miles and miles. I barely jogged and walked the warm up. 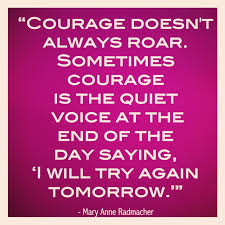 On Friday of that first week of school, a boy who knew my older brother teased me and said that my brother told him that I joined the team to lose weight. That day, after practice, I cried. The stress of my first week of high school had built up inside me and I let it all out.

The main thing that gets me, when I look back at this memory is the horrible feeling of embarrassment I had for wanting to lose weight. It was true. I didn’t want to be the chubby one anymore. I was tired of the fat jokes. I was tired of being slow. I wanted to be thin. What was wrong with that? First I was ridiculed for being overweight. Now I was being ridiculed for wanting to do something about it.

I’m sharing this memory with you now because I want you to know that you are not alone. There were times when I felt overwhelmed and wanted to give up. It’s a perfectly normal feeling, especially if you are new to something. Think of the first time you started a new job. In a way, the physical part is easy. The psychological part, the part that is dealing with the stress of change and the reactions of those around us is the hard part.

By the end of my first week of school, I had blisters all over my feet. My coach told me to purchase running shoes but I told him the sneakers I already wore were brand new and that my parents couldn’t afford new running shoes.  I guess my coach got tired of seeing me kick those shoes off because of my blisters, preferring to run on the football field grass. One day, he pulled me aside. He said that he liked my spunk and that if I kept trying, even though I could hardly jog, I would get better. He gave me a check for 100 dollars to spend on running shoes. He told me that it was scholarship money.

I couldn’t believe it! It seemed like so much money and I never spent that much on shoes before. I bought my first pair of Nike running shoes with that money and they felt amazing. It made me feel like a real athlete.

I probably would have quit if people like Coach Martin hadn’t supported me, letting me know that not giving up is better than winning right away. On my first cross country meet, I almost finished last. There might have been one or two girls behind me. I learned what it was like to literally eat someone’s dust. A whole herd of girls ran ahead of me, kicking dust into my face, mouth and eyes. Before I knew it, they were out in the distance and I was alone in the back with a few of the stragglers. At some point of the 5k course on hills, a new group of girls passed me. Yes, another race started and I hadn’t even finished the first one. Struggling up “pukes peak,” a steep hill at the end of the race, was shear torture. Still, I didn’t give up. My goal was to finish the race and I did.

I ran cross country throughout high school and discovered martial arts in the meantime, something I could get really good at. Over the years, I discovered more movement modalities such as yoga and pilates. I learned that exercise isn’t just about weight loss and muscle gain. Exercise can be used to achieve relaxation, rehabilitation, energy and healing. Over the years I have helped athletes, seniors, kids, beginners and elite practitioners, all with their own unique strengths and weaknesses.

I want everyone to know that there are so many fitness modalities that can help you in your journey to being healthy and strong. You just have to start looking. Try walking, running, dancing, martial arts, yoga, weight lifting, aqua classes, chair classes or many more. We are all on our own journey, a journey that will make us explore our bodies and minds. It will make us come to terms with what we can and can’t do, and what it means for us to be healthy.  I hope to offer to my support, no matter what your set backs and accomplishments might be.

For more personal stories and struggles check out:

Be Kind For Everyone You Meet is Fighting a Hard Battle:

This site uses Akismet to reduce spam. Learn how your comment data is processed.