I started reading more about the mindset of stress after hearing about the ground breaking study that interviewed thirty thousand adults. They were asked how much stress they had and if they believed that stress was harmful to their health.

After eight years, the records were checked to see who had died. It turned out that those who were stressed and believed that stress was harmful to them had an increased risk of dying by 43 percent. People who reported high levels of stress but did not think stress was harmful had no increase in mortality. In fact, they had the lowest risk of death of anyone in the study, even lower than those who reported very little stress.

You can read more about this study here:

Does the Perception that Stress Affects Health Matter? The Association with Health and Mortality

As you may already know, I’m always reading the latest findings on health and fitness. One subject that has greatly interested me is that of the new field of epigenetics, the science of how our environment affects and changes our genes. I became interested in telomeres, repeating segments of non coding DNA that live at the ends of cells. They wear down as cells divide. Scientists are saying that these telomeres are a great indicator of health and how long one will live. If they are short and worn down, it is a sign of deterioration. I read a whole book on this phenomena called “The Telomere Affect” by Elizabeth Blackburn PhD and Elissa Epel PhD. I learned from this book that the worst thing one can do to one’s telomeres is to be “stressed,” but their research also found that those who stressed about stress being bad for them were in far worse shape than those who had a “challenge” mentality. Those who responded to life’s hardships with an attitude to tackle it as a challenge had longer telomeres than those who reacted with fear and worry. 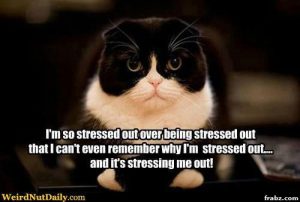 In Kelly McGonigal, PhD’s book, “The Upside of Stress,” she explains that two hormones can be released when faced with a “stressful” situation: Cortisol and dehydroepiandrosterone (DHEA). While both hormones are released by the adrenal glands, they serve different roles. Cortisol helps turn sugar and fat into energy but also suppresses biological functions such as digestion, reproduction and growth. DHEA, on the other hand, helps your brain grow stronger from the stressful experiences. It also counters some of the effects of cortisol. It speeds up wound repair and enhances immune function. The ratio of these two hormones can influence the long-term consequences of stress.

Next, the participants were put through a mock interview wherein the people they were supposed to impress acted very indifferent and critical. After this ordeal, saliva samples were taken. While all the subjects had a similar rise in cortisol levels, those who had watched the positive stress video had higher levels of DHEA, which has been linked to reduce the risk of anxiety, depression, heart disease, neurodegeneration and other diseases we typically think of as stress-related.

I was excited when I read about this experiment because it gave physical evidence of why our mindset is so powerful, something I have always encouraged in my students. Other studies have confirmed this idea such as research that hanging on to stereotypes about aging can effect older adults’ behaviors, IQ and even their health; a phenomenon known as ‘age-based stereotype threat’ (ABST).

You can read more about that here:

According to Kelly McGonigal, the best definition of “stress” is that which arises when something you care about is at stake. Her book and many other studies points to the fact that people who say they experience a lot of stress have more meaningful lives. You don’t stress about things you could care less about. So, people who have a positive stress mindset, the kind that actually contributes to better health, believe in finding meaning in their stress and learning to grow from it. This doesn’t mean they sugar coat the horrible things that happen to them. It simply means that they try to use their experiences to make them better people. We all know people who have been destroyed from horrible circumstances, but we’ve also seen people who have grown from them and have used these situations to find strength, resourcefulness and empathy for others in the same situation.

I also learned that it’s usually better to capitalize on that fight and flight response. It’s there to make you perform better. More research shows that trying to calm down when your blood is racing usually doesn’t work. But what you can do is tell yourself that this is a good thing. Use that surge in hormones to help you score that goal, ace that test or wow that audience.

So what else can we do to create a mindset that helps stress work for our health instead of against it?

Limit the amount of news you watch. According to a major U.S. survey, exposure to the news was one of the most commonly reported source of daily stress. 40 percent of those who reported high levels of stress said watching, reading or listening to the news was a major contributor. This increases a sense of hopelessness. Studies also show that it creates post traumatic stress disorder in the viewer, whether they witnessed the situation being aired or not.

Be open about your problems and look to others for help. Try to reject the viewpoint that other people are a source of stress. When we isolate ourselves from others, we take away many coping mechanisms like realizing that someone else may have been in a similar situation. It also takes away our ability to share and help those in need. Research has shown that helping others is actually a great stress reliever as it counters that feeling of hopelessness and gives our life purpose.

Find time to exercise. Of course I would add this as my final thought. I’m a fitness professional. Lol! But everything I study points to the fact that exercise is that magic pill, if done properly and at the right amount. It also gives us time to unwind or clear our minds. When I go to the local Y or teach a yoga class, it also gives me a sense of community. This past year, there were two deaths in my family. During these times, it was very difficult for me to come to class and motivate others but when I expressed the fact that I had to take some time off to be at funerals or memorials, some students and colleagues shared similar stories with me and I realized that I wasn’t alone. So, while I may not be free of stress, my life is full of meaning. Thank you to all of my students, followers and clients for sharing this journey with me, and I hope you have a wonderful holiday season.

Btw, this December is Live Healthy month at the Porter Ranch library. I will be teaching a pilates class on Saturday December 8 at 1:30pm. This event is free and open to the public. For more information, click here:

If you enjoyed this blog and would like to read more about mindset and belief, here is my very first blog ever written about mindset:

For more motivation on exercise, the magic pill, click here:

My thanksgiving love blog to all my students who give my life so much meaning:

1 thought on “Great News About Stress”

This site uses Akismet to reduce spam. Learn how your comment data is processed.